By Nidal al-Mughrabi and Jeffrey Heller

(Reuters) – Israel bombed Palestinian militant targets in the Gaza Strip from air and sea for a fifth straight day on Sunday, preparing for a possible ground invasion while also spelling out its conditions for a truce. 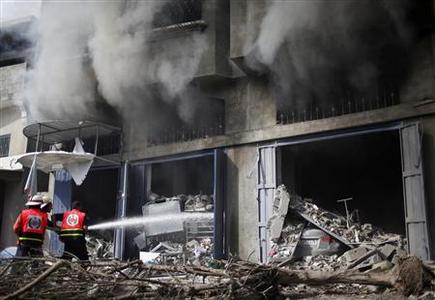 Palestinians launched dozens of rockets into Israel and targeted its commercial capital, Tel Aviv, for a fourth day. The “Iron Dome” missile shield shot down two of the rockets fired toward Israel’s biggest city but falling debris from the interception hit a car, which caught fire. Its driver was not hurt.

In scenes recalling Israel’s 2008-2009 winter invasion of the Gaza Strip, tanks, artillery and infantry massed in field encampments along the sandy border. Military convoys moved on roads in the area newly closed to civilian traffic. 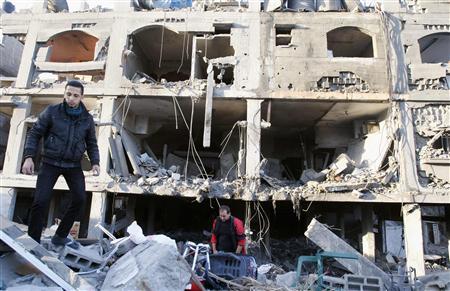 “We are exacting a heavy price from Hamas and the terrorist organizations and the Israel Defence Forces are prepared for a significant expansion of the operation,” Netanyahu said at a cabinet meeting, giving no further details.

Palestinian officials said 56 Palestinians, most of them civilians, including 16 children, have been killed in small, densely populated Gaza since the Israeli offensive began, with hundreds wounded. More than 500 rockets fired from Gaza have hit Israel, killing three civilians and wounding dozens.

Israel unleashed intensive air strikes on Wednesday, killing the military commander of the Islamist Hamas movement that governs Gaza and spurns peace with the Jewish state.

Israel’s declared goal is to deplete Gaza arsenals and press Hamas into stopping cross-border rocket fire that has bedeviled Israeli border towns for years and is now displaying greater range, putting Tel Aviv and Jerusalem in the crosshairs. 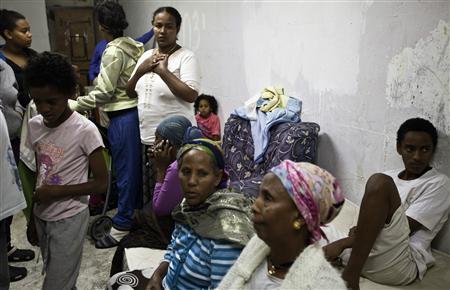 The Israeli military said the strike targeted a rooftop “transmission antenna used by Hamas to carry out terror activity”, and that journalists in the building had effectively been used as human shields by the group.

Egyptian President Mohamed Mursi said in Cairo, as his security deputies sought to broker a truce with Hamas leaders, that “there are some indications that there is a possibility of a ceasefire soon, but we do not yet have firm guarantees”.

Egypt has mediated previous ceasefire deals between Israel and Hamas, the latest of which unraveled with recent violence.

A Palestinian official told Reuters the truce discussions would continue in Cairo on Sunday, saying “there is hope”, but that it was too early to say whether the efforts would succeed.

U.N. Secretary-General Ban Ki-moon will be in Egypt on Monday for talks with Mursi, the foreign ministry in Cairo said. U.N. diplomats earlier said Ban was expected in Israel and Egypt this week to push for an end to the fighting.

Asked on Israel Radio about progress in the Cairo talks, Silvan Shalom, one of Netanyahu’s deputies, said: “There are contacts, but they are currently far from being concluded.”

Listing Israel’s terms for ceasing fire, Moshe Yaalon, another deputy to the prime minister, wrote on Twitter: “If there is quiet in the south and no rockets and missiles are fired at Israel’s citizens, nor terrorist attacks engineered from the Gaza Strip, we will not attack.” 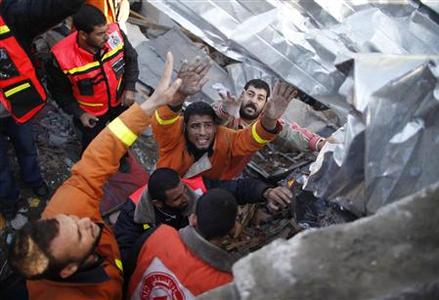 Israel’s military also saw action along the northern frontier, firing into Syria on Saturday in what it said was a response to shooting aimed at its troops in the occupied Golan Heights. Israel’s chief military spokesman, citing Arab media, said it appeared Syrian soldiers were killed in the incident.

There were no reported casualties on the Israeli side from the shootings, the third case this month of violence that has been seen as a spillover of battles between Syrian President Bashar al-Assad’s forces and rebels trying to overthrow him.

Israel’s operation in the Gaza Strip has so far drawn Western support for what U.S. and European leaders have called its right to self-defense, but there was also a growing number of appeals from them to seek an end to the hostilities.

British Foreign Minister William Hague said on Sky News that he and Prime Minister David Cameron “stressed to our Israeli counterparts that a ground invasion of Gaza would lose Israel a lot of the international support and sympathy that they have in this situation”.

Israel’s cabinet decided on Friday to double the current reserve troop quota set for the Gaza campaign to 75,000. Some 31,000 soldiers have already been called up, the military said.

Netanyahu, in his comments at Sunday’s cabinet session, said he had emphasized in telephone conversations with world leaders “the effort Israel is making to avoid harming civilians, while Hamas and the terrorist organizations are making every effort to hit civilian targets in Israel”.

Israel withdrew settlers from Gaza in 2005 and two years later Hamas took control of the slender, impoverished territory, which the Israelis have kept under blockade.

Ben Rhodes, a deputy national security adviser to President Barack Obama, said the United States would like to see the conflict resolved through “de-escalation” and diplomacy, but also believed Israel had the right to self-defense.

A possible sweep into the Gaza Strip and the risk of major casualties it brings would be a significant gamble for Netanyahu, favored to win a January election.

The current flare-up around Gaza has fanned the fires of a Middle East ignited by a series of Arab uprisings and a civil war in Syria that threatens to spread beyond its borders.

One significant change has been the election of an Islamist government in Cairo that is allied with Hamas, which may narrow Israel’s maneuvering room in confronting the Palestinian group. Israel and Egypt made peace in 1979.

On Saturday, Israeli aircraft bombed Hamas government buildings in Gaza, including the offices of Prime Minister Ismail Haniyeh and a police headquarters. 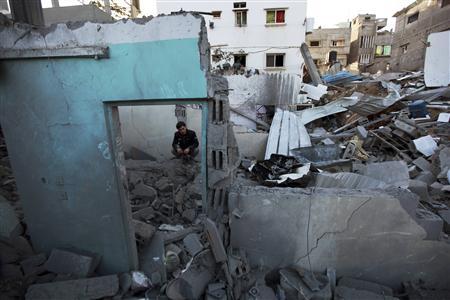 However, one rocket salvo unleashed on Sunday evaded Iron Dome and wounded two people when it hit a house in the coastal city of Ashkelon, police said.
(http://www.reuters.com/article/2012/11/18/)